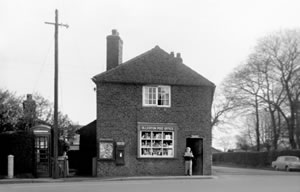 Ollerton and Marthall have experienced the dynamics of the modern English countryside. Work has steadily moved from farming and increased mobility has allowed villagers to work miles from their homes, in some cases even in other countries. This mobility has also brought competition to local businesses and services with out-of-town megastores and shops.

Our villages’ post-office closed in 2000 and our nearest post office is now in Chelford. In the years before its closure, it had been a key part of Ollerton and even kept in business having had to move premises across Ollerton Cross Roads when its original building was demolished to make the exit from Marthall Lane safer.

Many accidents had happened at this accident blackspot as illustrated by this 1965 picture. 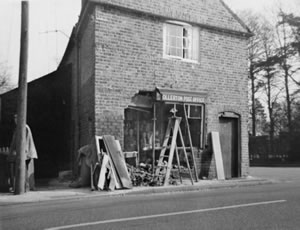 Mr & Mrs Bailey are fondly remembered as the last operators of the Post Office, with Mrs Bailey taking over for a period after the loss of her husband. Mrs Bailey’s retirement was marked by a presentation in 2000. More Post Office history in this section. 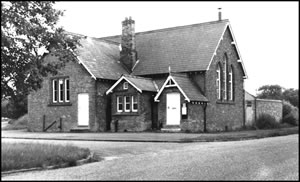 Ollerton has had two school buildings in its history. The first, according to a historical record, was funded from the estate of Samuel Leigh and built around 1700. The second school was built near to the first in 1876 by Lord Egerton. In an agreement dated 1903 between Lord Egerton, Managers Rev. Gresswell, George Staniere, Samuel Callwood and J.T. Smith, his Lordship gave permission as Tenants to use the School for educational purposes. Due to falling numbers of pupils attending, the school closed in 1993 and was sold in 1994. It is now a private dwelling. More school history in this section.

The Methodist Church built in 1886 served as a place of worship for the community for almost a century and closed in 1982 due to the number of worshipers falling to a very low level. 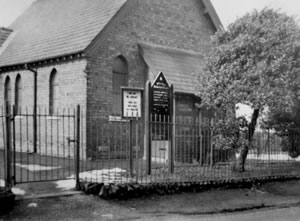 There is evidence that suggests that in the early part of the last century, Congregationalists and early Methodists held services in a cottage in the village, but it was not until 1867 that the Wesleyan Methodists took over the cottage known as ‘Number 3 Toll Bar Cottages’ in Marthall lane and commenced holding services there. The first of which took place on the 2nd June 1867.

The cottage was given rent-free by Mr G Caldell, the Nurseries over Knutsford, and this continued for 19 years. Prior to 1886 Number 2 Toll Bar Cottages was also used as a preaching room.

On the 5th August 1885 the stone laying ceremony took place for the Chapel, and it was opened on the 4th August 1886. The Chapel was closed for worship in 1982 and sold by the church authorities. It is now a private dwelling

THROUGH THE EYES OF A FORMER PUPIL

Mr Arthur Crimes, a past pupil of the school in the 1930s started school at the age of 5 years and spent his early education in the “little classroom” and then at the age of 8 years moving up into the “big room” under the instruction of the Head Teacher. The start of the school day was the ringing of the school bell with the same after dinner to start the afternoon lessons. Older pupils were appointed as Monitors to see that the desk inkwells were supplied with ink and other tasks to ensure the school day ran smoothly.

Games were part of the school day with the school having a football team and engaged in rounders, cricket and ball games in the school playground. Pupils were allowed to make super slides on the village pond across the road from the school during the frosty winter period. The pond was a quite sizeable area of water and of course, the traffic in School Lane was almost non-existent and the playing of marbles and the spinning of Tops (Sleepers and Window Breakers) could safely take place in the Lane.

The School closed in 1993 and sold in 1994 and is now a private house. The closure of the School was a sad occasion, and as Chairman of the Governors along with teachers and staff from the School, parents, and residents of the Village organised a strong campaign to keep the School open. But with pupil numbers being approximately 30 and predicted to fall over the next ten years, the battle was lost. Another aspect of village life which cannot be regained but maybe to the benefit of gaining a broader education for our children.

The school was built in 1876 by Lord Egerton and an agreement dated 1903 between Lord Egerton and Managers, Rev. Greswell, Charles Stanier, Samuel Callwood and Mr. J.T. Smith, his Lordship gave permission as Tenants to use the School for Educational purposes.

Under the Elementary Education Act of 1870 the County was divided into School Districts and Boards were elected and empowered to establish and maintain Elementary Schools.

Universal Compulsory School attendance was not achieved until later Acts in 1876 and 1880 were passed. The Education Act of 1902 abolished School Boards, transforming their functions to the County Councils. The Education Act of 1918 abolished fees in Elementary Schools and raised the school leaving age to 14 years and also established Nursery Schools for children between 2 and 5 years of age.

The Education Act of 1944 repealed earlier legislation and restarted the new National System of Education which has influenced the pattern over the following years. During this time the Ministry of Education raised the leaving age of pupils to 15 years and then 16 years and promoted Primary, Secondary, and Further Education through the County Education Authorities and Local School Management Bodies.

George Littler
18th August 2004, with thanks to Mr A. Crimes for his contribution 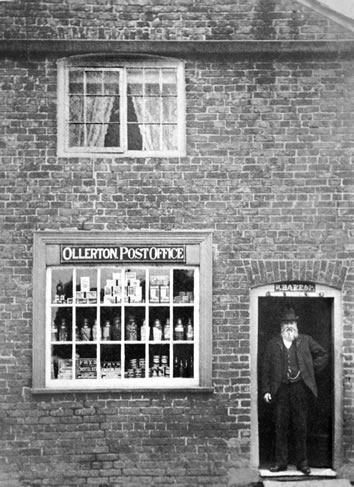 Ollerton Post Office was originally No. 1 Toll Bar Cottages; the row of cottages on the left when you turn left into Marthall Lane from the Ollerton Cross Roads. It was demolished in the late 1960s to improve visibility coming up to the main road from Marthall Lane. The Post Office was then relocated over the road to an annex to 1 Yew Cottage – the first cottage on the left in Seven Sisters Lane. The annex has now been demolished following the closure of the Post Office.

The first record to hand of a Post Office in Ollerton is Circa 1880. The tenancy of the Post Office was held by a Mrs Elizabeth Harrop and Mr William Harrop. The location was the property in Marthall Lane known as Toll Bar Cottages. At that time there was an outbuilding situated on the left-hand side of the Knutsford side of the main dwelling, known as the Bake House, where Mrs Harrop used to bake oven bottom loaves on the premises for the village. A Mrs Crimes took over the tenancy from the Harrops and ran the Post Office until 1924. From 1924 until 1947 there were several tenants but in 1947 three friends Mrs Mary Horn, Miss Beatrice Bowker and Miss Jessie Matherson took over the tenancy and soon became known locally as the Shop Ladies.

The ladies were quite unique as the villagers relied so much on the services they provided. The Shop Ladies ran the Post Office come village shop from 1947 to 1967. In 1967 the property was bought by Cheshire County Council and demolished to make way for a road-widening scheme to improve visibility at Ollerton Cross Roads.

This early photograph taken in the direction of the Dun Cow showing the original location of No. 1. Toll Bar Cottages and how it protruded out restricting the vision right when coming out of Marthall Lane.

The proposal to close the post office and demolish it was of great concern to the residents of Ollerton and a public meeting was called in 1966 to be held in the village school to discuss the matter. The school room was filled to capacity and resulted in Bucklow Council being requested to “provide a new shop and post office at economic rent”.

Eventually the matter was resolved by a local benefactor providing new premises attached to No 1 Yew Tree Cottages, just across the roads from the Old Post Office Location. The three ladies moved into the new premises in 1968. Miss Horn died in 1968, Miss Bowker in 1969 and Miss Matherson in 1975. The photograph below was taken after No. 1 was demolished. The small fence shows the original boundary.

In 1975 a ceremony was attended at the crossroads in recognition of the three ladies for their services to the local community over a period of 25 years. A Sorbus Tree ( Joseph Rock ) was planted By Councillor John Mason (Parish Council) deputising for the Chairman Mr George Littler and Lady Butterworth ( Vice Chairman of the Women’s Institute ) and a memorial plaque was placed at the base of the tree. ( See web site section “Village Journey” ).

The final event related to the Ollerton Post Office was a retirement presentation to Mrs Bailey by Mrs Perry of Manor Lane which took place outside the Post Office and was attended by a large number of residents and proved to be a very emotional time as the village lost a key facility to village life and well respected Village Post Mistress. 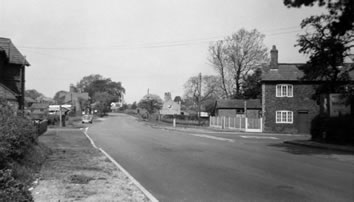 The photo on the left shows Ollerton Cross Roads circa 1930, looking in the direction of the Dun Cow. Note the two cottages on the left just visible past the telephone pole and before the Dun Cow, which have been demolished but the original boundary hedge can still be seen. The cottages were demolished at the time Caldwells Nursery in Knutsford wanted to relocate to Ollerton to a location that existed as Caldwells Rose Nursery on land adjacent to the cottages. Following a public meeting, the planned relocation was rejected by Ollerton residents based on safety issues related to access to the site from the main road and the effect the business would have on the local community – particularly the residents in Marthall Lane and the cross roads area.