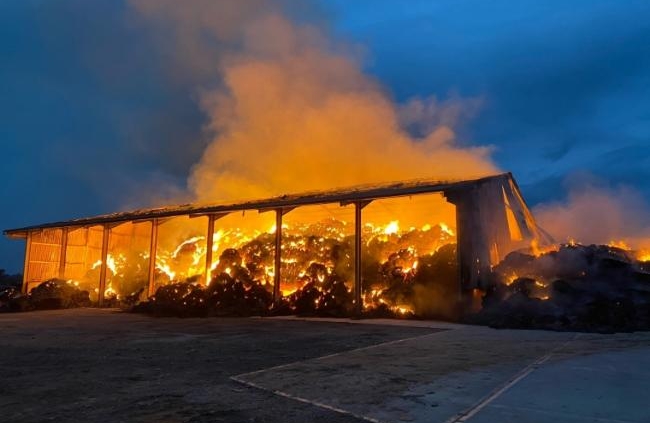 One of three large barns on Marthall Lane spontaneously caught fire on 22nd September, at around 1pm.

At it’s peak 14 fire engines attended the scene and in order to manage a high volume pump from Ollerton Crossroads initially a 4-way traffic light system was installed. By the following day Marthall Lane had to be closed to prevent traffic interrupting Cheshire Fire’s activities.

Farm machinery was used to move unaffected hay bales away from the fire. Three branch holders were used from the high volume pump to create a water curtain to stop the fire from spreading to other barns and to prevent them from sustaining heat damage from the flames.

Due to the extent of the fire and the fact that it was contained to the barn, a decision was taken, with the support of the Environment Agency, to allow the affected hay to burn off.

The fire raged for 9 days and eventually after dousing the barn continuously and some rainy weather the fire was deemed extinguished.

The barn, owned by the Fielding family has been badly damaged and it is thought around 8,000 bales of hay were lost.

Want to join the discussion?
Feel free to contribute!