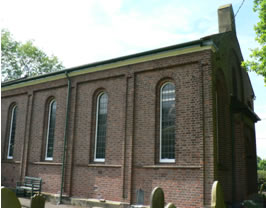 The Parish of All Saints Marthall serves the villages of Marthall, Ollerton and Little Warford.

Please see www.clmruralchurches.org.uk for the latest service times and news.

The church was consecrated by Dr John Bird Sumner, Bishop of Chester, on 1 November 1839. According to the church archives, “it was built by the munificence of WILBRAHAM EGERTON Esquire, of Tatton Park, Lord of the Manor, as a chapel of ease to Rostherne Parish Church…”

The district comprising the townships of Marthall-cum-Little Warford and Ollerton was assigned to this Church on January 10th 1840. The above district was constituted a separate parish with the name of ’Marthall’ on February 1st 1856 (New Parishes Act 1856).

The Parish of All Saints is very rural and so the church year reflects the rhythms of life in an agricultural setting as much as it celebrates the major Christian festivals such as Christmas and Easter. Below is a list of popular ‘country’ services held at All Saints:

The land on which our church was built was donated by Wilbraham Egerton (1781-1856) and was consecrated All Saints’ Church Marthall by Dr John Bird Sumner, Bishop of Chester, on 1 November 1839. The church is located at Glover’s Cross and building work was completed in 1841.

The district comprising the townships of Marthall-cum-Little Warford and Ollerton was assigned to this Church on January 10th 1840. The above district was constituted a separate parish with the name of ’Marthall’ on February 1st 1856 (New Parishes Act 1856).

At that time there were more than 300 people living within one mile of the site of the church, but more than two miles from an existing place of worship. Previously, parishioners had attended Over Peover church, and people would use a lane in nearly a direct line from Glover’s Cross to Peover Church for their journeys. After the opening of Marthall Church, the lane was redundant and became wholly absorbed into the surrounding fields.

In 1886, thanks largely to the munificence of Wilbraham, Baron Egerton of Tatton (1832-1909), fundamental alterations to the church were undertaken. A new chancel and vestry were added to the original building.

The organ in the gallery was relocated in a new organ chamber opposite the vestry.

Re-siting of the organ provided additional seating in the gallery. 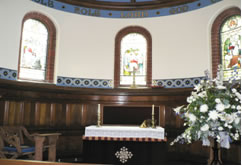 A new communion rail manufactured from light oak was installed c. 1965. Sculpture on the vertical supports symbolises peace and light as inspired by the Holy Spirit.

As a memorial, and in appreciation of the generosity and support shown by Baron Egerton of Tatton, the local parishioners jointly funded the manufacture and installation of three beautiful stained glass windows located in the apse of the church.

The scenes depicted are:-

In 2006, 120 years later, the parishioners raised a further £4000 to cover specialist restoration and repair work necessary to these windows and the apse.

The pews and church woodwork were originally finished in dark oak. Around 1980 the woodwork was stripped back to bare wood to produce the existing light oak appearance.

The David Lewis Centre is both a challenging and inspirational place to work due both to the commitment of the staff and the courage and bravery of many residents. During my two years as chaplain at the centre I have enjoyed building up relationships with all of them; my role is much the same as that of parish priest. There are many needs, and though the context at the centre is different from that of a rural parish, there are the same stresses in relationships, worry about illness, sadness following a loss, the same fears….people are people.

There are two weekly services at the centre:

– Wednesday afternoon at the end of the residents’ working day.

The local Methodist minister has involvement in the service twice a month and a team from the Roman Catholic Church regularly brings Holy Communion to RC residents.

The Parochial Church Council known as the PCC is responsible for the administration and finances of the Parish church. The PCC is unconnected with the parish council, which is part of local government. The incumbent or priest in charge and churchwardens are automatically members of the PCC and the others are members of the laity elected from time to time. To be elected it is necessary to be on the electoral roll of the Church which is open to those over the age of 16, baptized and a member of the Church of England.

Historically, all parish churches were run by the incumbent and the churchwardens with the laity having little or no say in either administration or finance but after the Great War, an Act was passed in 1919 bringing into being Parochial Church Councils.

PCC meetings, held at regular intervals, are not open to the public but an annual meeting is held, which is open to those on the church electoral roll and it is then that elections are held and reports given on finance and all other relevant matters.

For further information, contact should be made with the Churchwardens.